The cityscape is seen against white background, cut out behind screen/sheet. There are lights/.slides, maybe dawn time. Music. maybe last for a minute or so until narrator enters.

Narrator: Here is the city, it’s a new morning, deep in the bowels of this machine, things are afoot.

The creature is being built, we see this animated on screen. Different people come and go each leaving a small part of the creature to make the whole, Emphasis on the variety of the people, creature slowly grows in stature. Music.

Narrator: And so the creature begins its work.

The creature starts his work(?) after some time it starts to consume everything including the people round him, bellowing

Creature:  The time has now begun to carry out my real work, to sterilise all these germs

We follow the consumption the of several people down through the creatures digestive system where they enter a bar located in its stomach. There they are offered a srange stomach juice entitled the elixer of purity. On drinking it each person exclaims “now my impurities are gone” and undregoes a change; all the people become uniform (lego figures or somehting) this should make a contrast but not too tacky with the variety before. The are bletched out into a big pile of rubbish/slime/crap.

City backdrop again, lights.
Narrator: So we see the creatures machinations as he cleans all he consumes all he can, leaving nothing in his wake. We turn now to The Lonely Germ, he is the last bacteria on earth…
Enter lonely germ, weeping, misery, singing

Lonely Germ: sings the ballad of the lonely germ (to be written)

Collapses in horror, hears strains of banjo in the distance, turns his head and moves slowly towards it.

Meanwhile, the Rancid Cow is sitting singing and playing the banjo against the city backdrop plus lights. Hes in a chair, maybe a straw in the hat etc…

Lonely Germ: Who are you?

Rancid Cow: I am the Rancid Cow!

Lonely Germ: Ah! Im so happy, I thought there were no more rancid creatures left…

Rancid Cow: Well ive been hear for a long time playing my song and I suspect ill will be…

Lonely Germ: Can I ask you a question?

Lonely Germ: well you know the creature been wiping away all before it, I thought maybe you would need some extra bacteria in on of yr 4 stomaches.,,.  What do you say..?

Rancid Cow: Hmm, what a lovely propostion, dive in!

Inside the cows stomach, another bar, the Petri Dish, inside the germ meets his long lost companion! Something like cocktail music and cheese…

LG: Hey guys!
GERMS: hey man, amazing blah…
Most this can be ad libbed, we’ve all see our friends before… sings a rowdy song (needs to written)
Add libbed getting sad about death of everything/germa/bacteria…
(sing sad ballad of Lonely Germ)
ONE GERM: I know what we can , we’ll hatch the plan of a tape worm!

The monster is till eating stuff, animated, generall ming and depravity.

Narrator: So the germs start to hatch there plan, they find a friend whos willing to help.

Teddy bear laying back, the germs cut him open and insert some weird shit, sew him back up. Sqeltches and clanking music etc… this is animated.

We see teddy get eaten by monster.(animated)

Internal organs of the monster. Digest sounds and appearances, we see the tape worm start appearing from the teddy?he sings a song. Remember the tape worm is a Trojan Hors.

Germs are sprawlings out of the tapeworm, all over the place, this is still animated, but at a certain point lights/slides coming flashing in and live actors also appearing racing round, general insanity ensures, slime, shouting, blubbering, possibly this is happening in the dark and so we have neon and craziness. OR as the animating lights reaches a crisis, they cut and then in the dark the actors appearing wrecking havoc with neon refracting or whatever it does. This builds as a heart beating sound comes slowly to the fore, image of heart now on tv screen, maybe beating, sound of beating comes to the fore and becomes slower and slower, maybe actor are off stage or just collapsed by this point. Gets slower til so stretched its impossible, then maybe flatline image and tv dies and flickers off.

Drew this in Greece during 2007 couldn’t get the Black Sabbath song out of my head. Even after drawing this its still lurking there somewhere ever present.

A page from a comic I started last year provisionally titled “Seas I have been sick in: A beginners guide to freeing your mind.” Work on it ground to a halt due to various other commitments, will hopefully to be picked up again in the spring and summer of this year. Final work will be black and white no doubt, small moments of photoshop insanity above…

The Bicycle Orchestra were quizzed last week when we were down in London by a corresspondent from the East London Times. See the resulting article here.

The Levenshulme Bicycle Orchestra are going to be featured on The Bike Show on Resonance FM this coming Monday 25th January at 6:30!

If you’re in London you can hear Resonance on 104.4 FM. Everywhere else you can hear the show via their webstream. There’s also a podcast available from the Bike Show blog.

We’re going to be out and about the UK over the next few months in support of our soon to be released ‘Nine Doors’ CD/download on Concrete Moniker. Its going to be mega. Do come by if you can make it! There’s also a split tape in the pipeline from Ikuisuus and a couple of remixes of tracks from the CD on their way… 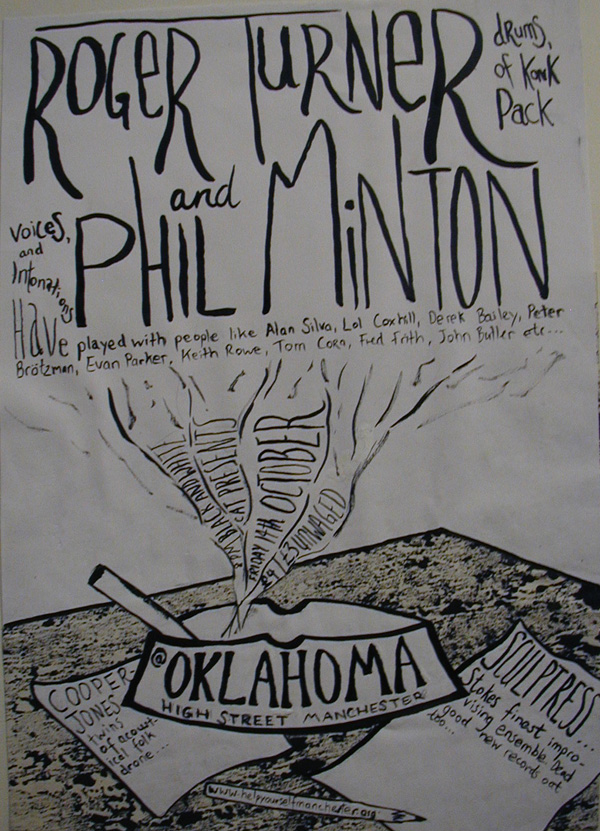 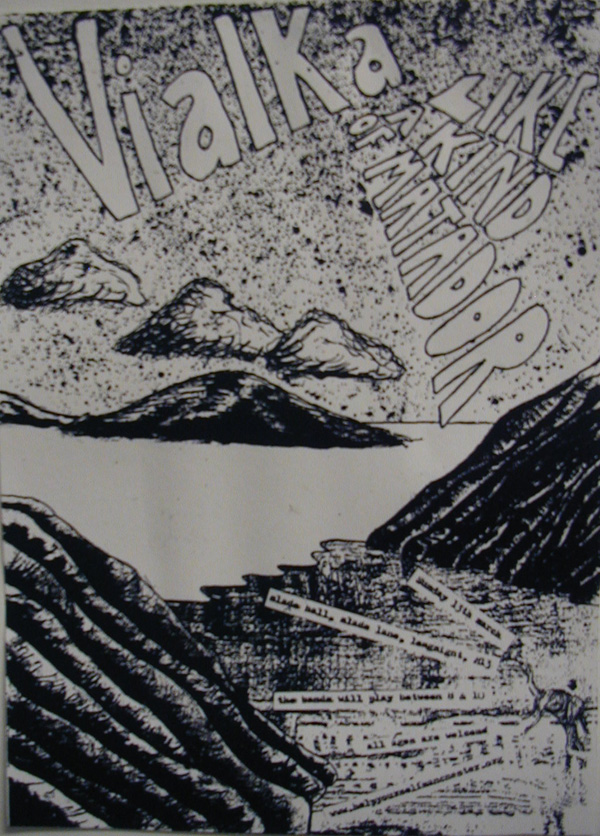 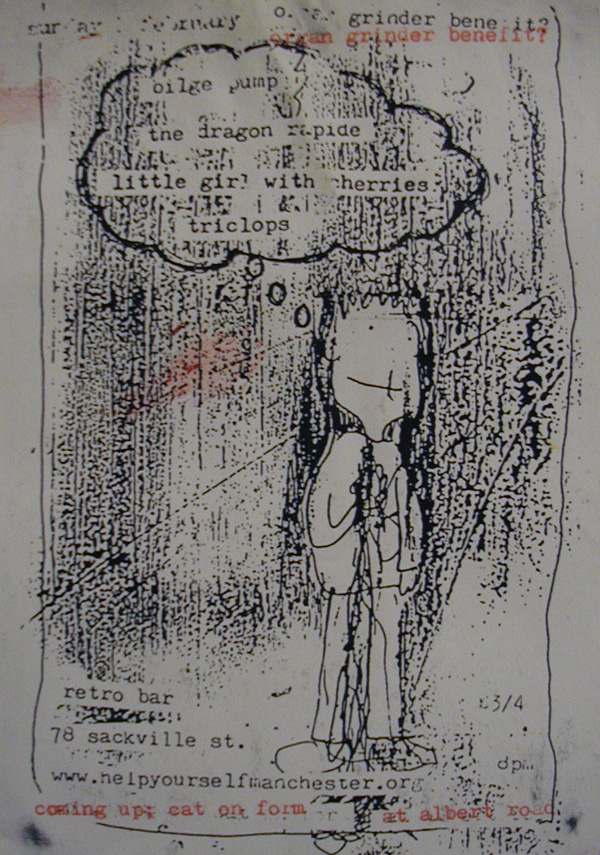 If you’re around in Manchester tonight pop by to the opening of an exhibition of DIY gig posters organised and hosted by Kraak Gallery in the Northern Quarter! There’s a wall of helpyourselfmanchester posters a couple of which I drew and printed (some pics above) and loads of other great stuff from various promoters. Open from 8 apparently, Kraak is down an alleyway off Stevenson Square behind Hula bar. There’s a map on their site.

The exhibition is on for another two weeks and the space is definitely worth seeing and supporting.

There was a huge snowfall on Manchester on Monday evening and as you’d expect the whole city was at a complete standstill on Tuesday morning and probably will be most of the week.

Noticed an interesting acoustic phenomena on Tuesday morning when Helen and I rather optimistically went to see if the buses were running down Upper Chorlton Road. There was near silence and absence of background noise. We stopped and listened for a little while totally fascinated. We put this down to the absence of traffic on the road, there were only a couple of cars out driving very slowly rather than the constant flow of vehicles you normally see on this stretch of highway.

However, I this morning I came across an excellent acoustic explaination from Trevor Cox of Salford Uni for the presence of silence on snowy days. He points out that snow dulls the ground surface which is usually highly reflective to sound leading to a reduced general noise level. Read what he wrote in detail here.

The texture and light picture I took yesterday in Alexandria Park, Moss Side on my walk home. 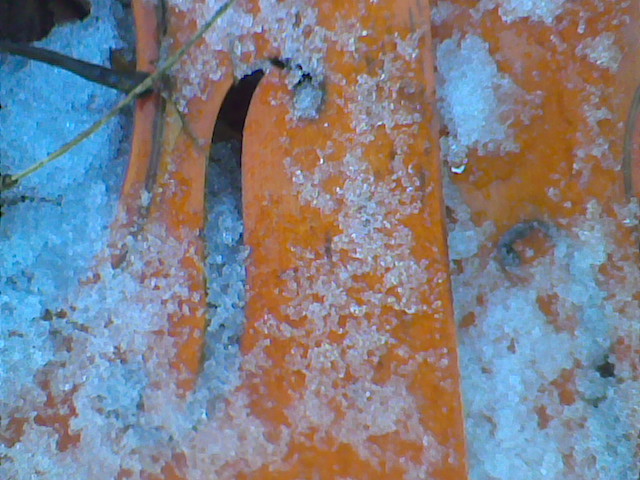