We had to try and remember what the track we recorded with Jack in July was called earlier in the week. I had no idea, luckily Kirsty reckons it was called “Ulversdalen” or “Wolfvalley” so we went with that… it’s going to be a split with the majestic Spoono on the audioMER label from Belgium.

Dug out a reasonably condensed interview with did with BBC Manchester a little while ago which explains somethings, not all but quite a few. Transcript is below.

Who is in the band?

“Kirsty sings, plays the violin and recorders. David plays guitar, sings and jew’s harp. We are occasionally supported by Nick on percussion.”

What type of music do you play?

“We play our own readings of Scandinavian folk melodies, building new arrangements around old tunes.”

“Well, we are siblings so we have played music together in one form or another for a long time!

“This particular group came about from improvisations and the chance idea to try playing a Norwegian song our mother, who hails from those parts, had sung us as children. It all spiralled from there really; speaking with her about other melodies, researching in libraries, books, audio.

“This was all about three years ago – at a certain point, David of Little Red Rabbit asked us to play a gig and so off we went and carried on playing from there.”

How are things going?

“We haven’t won anything, unless you count a pub quiz a few years ago, but we’re doing okay.

“We have played all over the UK, toured in Spain and Portugal, we recently played a really great festival in London called the 2:13, which went really well. Hopefully, we’re touring Spain and Portugal again next Easter.

“Then the new record comes out and we’ll be touring the UK and further reaches across mainland Europe again.”

note that as ever i cant keep still and am blurred…more pictures to follow, hopefully with some blurred dancers rather than stationary ones, as well as video. Im going to get the score online soon too…

SPOKE is a new contemporary dance work created by Ad Hoc Dance, directed by Ruth Tyson-Jones. It has taken creative writing, either found, gathered and/or authored as a starting point. The spoken word is skillfully interwoven into the choreography. A specially created score has been created and will be played live, by David Birchall.

The evening’s bill will be shared  – The Lowry’s in house youth dance company, Commotions will present a new contemporary choreography. This work has been created alongside dance artist, Debbie Milner.

George Lewis A power stronger than itself: The AACM and amercian experiemental music London: University of Chicago Press 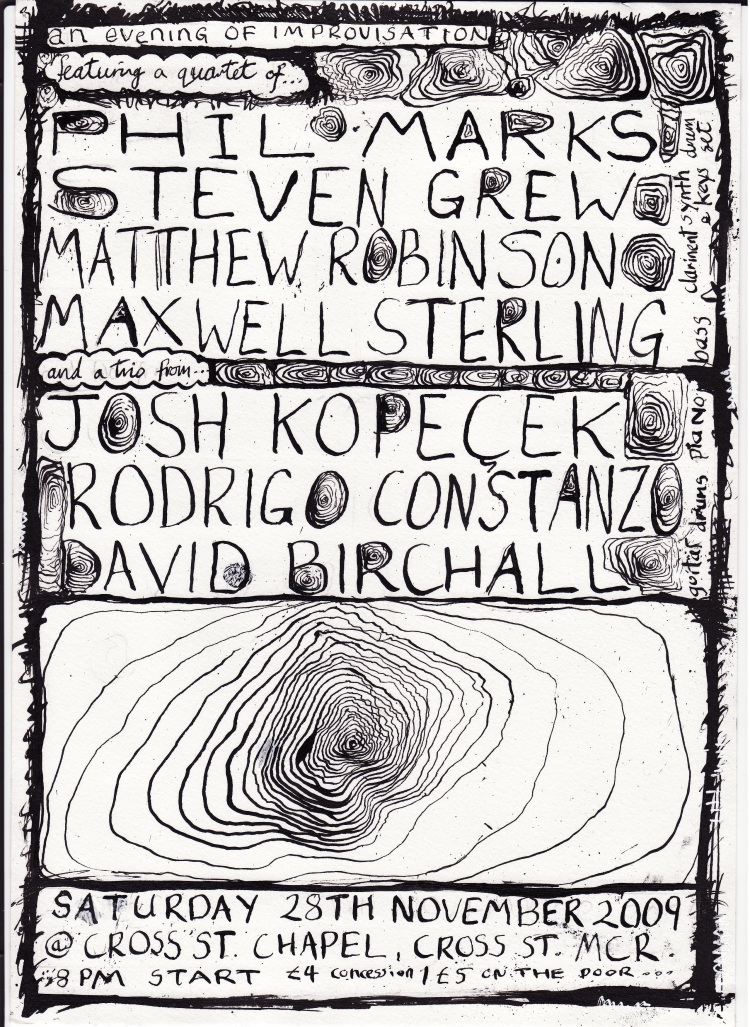 Saturday evening in about a month and a bit should be a great night of free playing and improvising! Do come down if you have the opportunity… 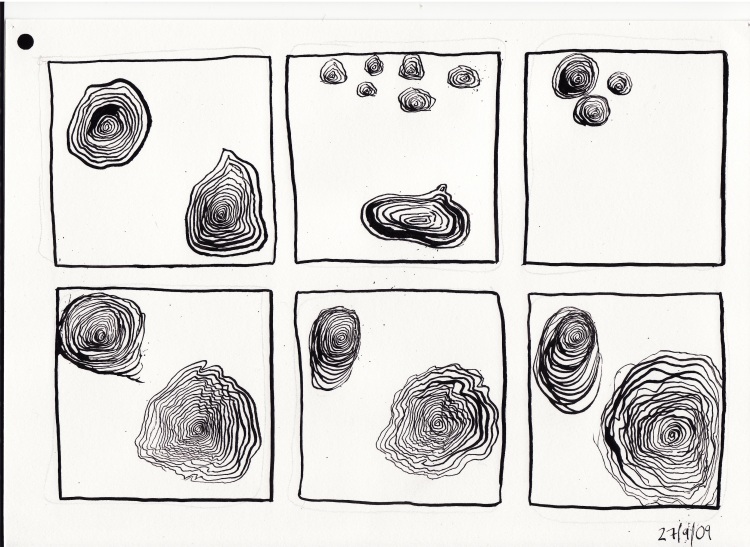 Started work on a few drawings after having not really done any drawing work for quite a few months. This began just trying to start out with one of the simplest shapes and one of the first recorded marks by mankind: theres spirals all over prehistoric stuff. Also it tied in with some of the ideas relating to microtonality or true tonality or Just Intonation; whichever you want to call it: that  the circle of 5ths actually being a spiral due to tiny differences in frequency as you add up.

Also wandered about the possiblities of using spirals in graphic scores: a great shape to describe shape, mass and weight as well as giving an impression of length, could be combined with boxes and shapes as potential time indicators too.

Currently Im also figuring out some actual practical applications of whole tone ratios for the guitar. After a summer reading up on the ideas of Harry Partch and Just Intonation and being slightly bemused but very excited about the theoritical possiblities I finally realised a bit of simple maths, a ruler and a glass slide was all I needed to actual make it practically relevant with the guitar.

Im going to put a longer post explaining all this in a lot more detail once I feel like ive totally got to grips with it! 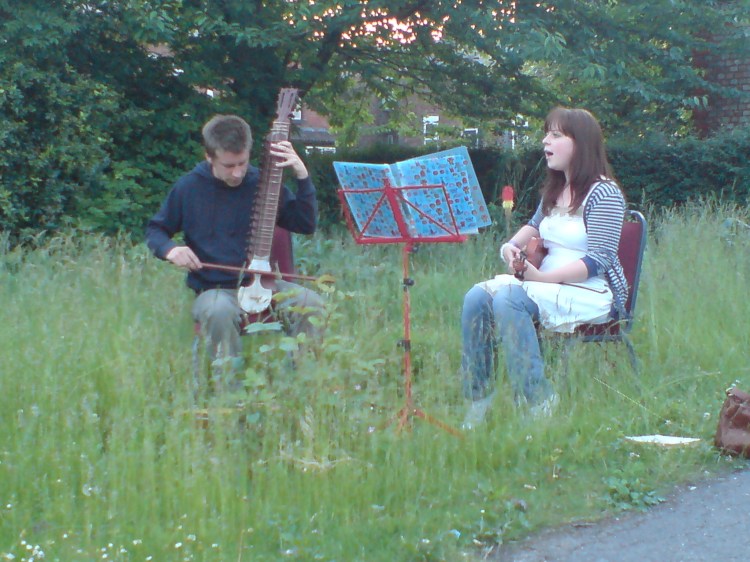 Summertime a few years ago I think, at the Klondyke in Levenshulme supporting Lianne Hall and Drei. Was such a charming June evening we decided to play out in what passes for a wild flower meadow in Lev. From what I recall there was only one incident with a passing car; there was also an audience, sadly out of shot, I suspect we’re probably trying to interact with them in the middle shot.

In the final one im playing my esraj, its only live outing so far. You can hear it on the Kalbakken record though, track 9 I think.

Thanks to Bela for the photos and Daz for lending me his lovely Taylor guitar you can see in the first two pictures. 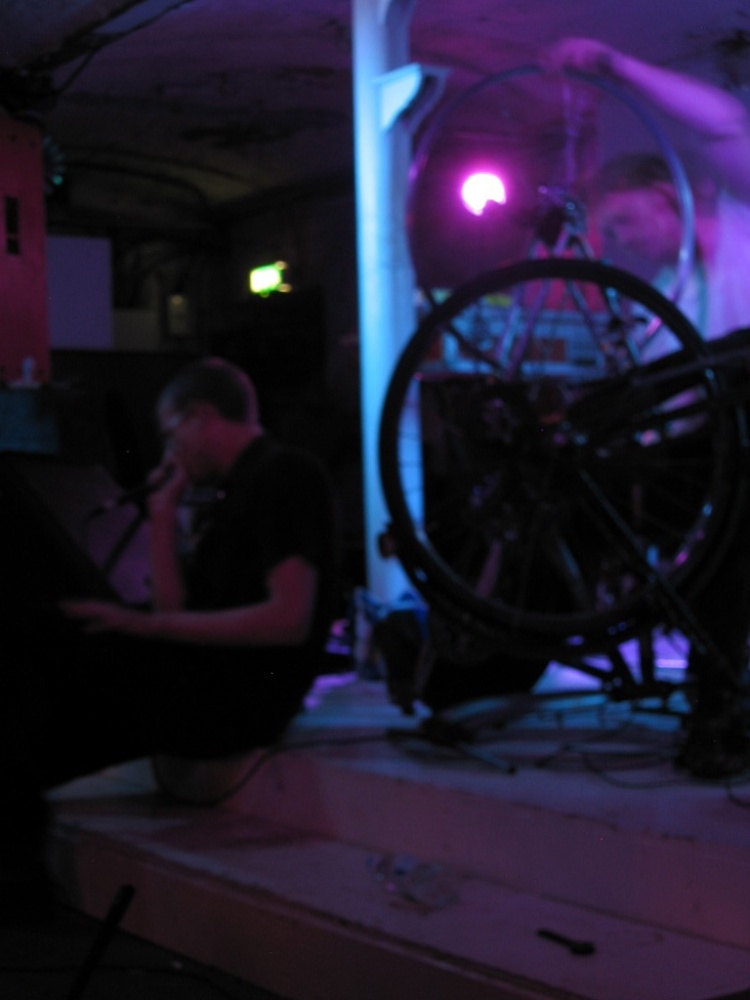 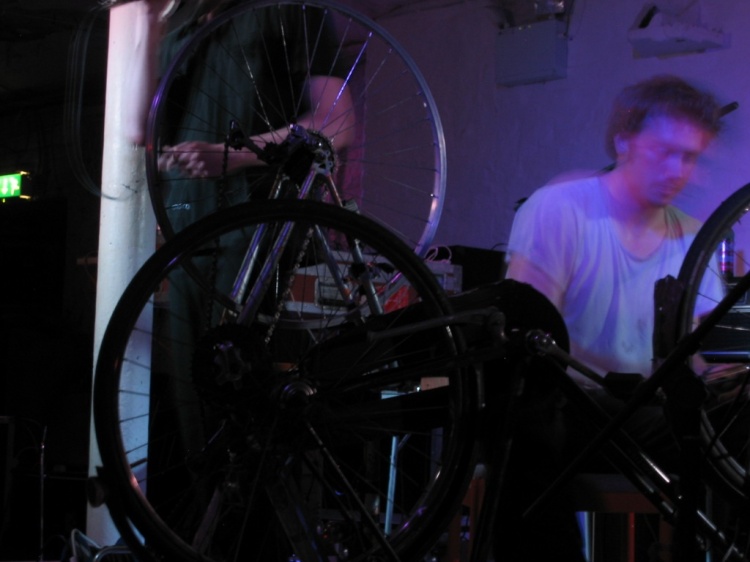 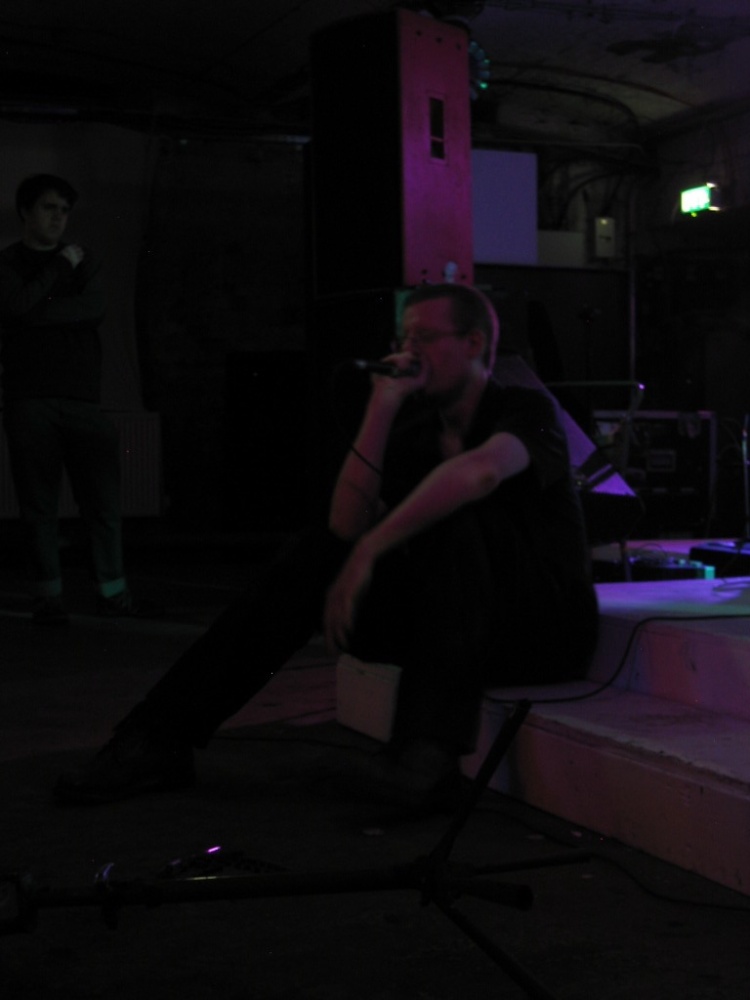 Some snaps above of our ongoing bicycle based horrorshow live at Islington Mill in Salford last night. Show was notable for my nearly totalling all of the bike based instrument sculptures with my first physical gesture of the set.

Disaster was narrowly avoided via some careful cable wiggling and shouts of “Youve ruined Christmas now Jimmy” from the more lively parts of the audience. Managed to lay down some good grooves though eventually; mostly informed by the rhythmic memory of Huw’s 90s reggae tape that we had on repeat in the Volvo on the way over. You can’t make this stuff up.

Bike Orchestra wise we’re playing on the Thursday 29th of October as part of the Vaudeville night at the Greenroom in Manchester. We will be in the studio with the talented and brave Joshua Kopecek in the next few weeks and hopefully this session will produce material for a download and CDR release on Manchester’s Concrete Moniker and a tape split on Ikuisuus. 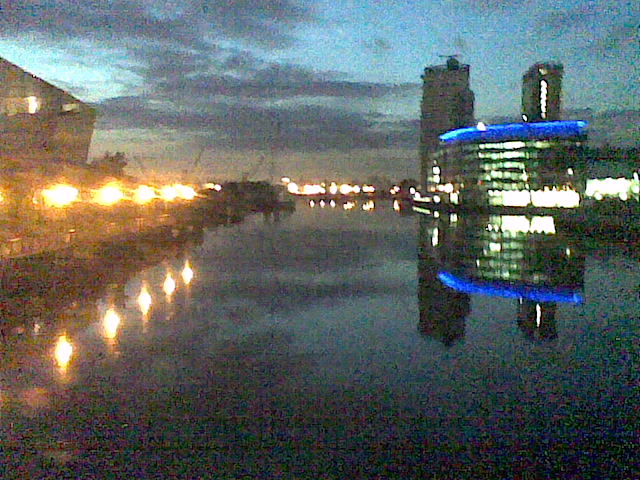 Picture taken heading from Trafford Bridge towards the Lowry along the promenade on my way to rehearsal last night with Ad Hoc dance. There’s a lot of incredible open views in that part of town; the expanse of water pushes the horizon way further out. Im not surewhat it’s like in the day time but theres a real desolate end of the world feel at night.These long quaysides totally devoid of people, only the scale gives a hint to the original purpose and labours of the place.

With the music im writing with Ad Hoc ive been trying to isolate fragments from improvising along with the dancers as they put the piece together and then to use this as a more solid base for improvising out of. Refining and refining. Guitar is tuned to D/A/D/Fsharp/A/D Some notes below:

Performance is on 9th November at the Lowry Studio theatre.

Been following up a long standing interest in why acoustic guitars are so quiet when compared to other instruments of a similar body sized (the cello being the obvious example). This orginally came about at kalbakken practise when we noticed just how much louder Kirsty’s violin could be at full pelt compared to my guitar, which considering the different volume of the sound boxes seemed pretty wild.

It seems to be something to do with that alot of very careful design and consideration has gone into the exact shape of the body of the violin to create natural resonaonces which produce a bigger sound; also a bowed instrument is louder due to the nature of the sustain.

All this to lead me to look at the design of most acoustic guitars today; flat back and front, round sound hole, which is relatively inefficient as a means of projecting sound but appears to be the most usual design. With this in mind I started looking at the possibilities of archtop guitars which maintain some of the features of the violin/cello style in the angled back and sides and f sound holes; as luck would have it Ive ended up with a lovely framus archtop fromt he 60s on loan from Pascal which sounds great.

Eventually as i continued thinking around what other possiblities of guitar design there were it struck me: the amazing metal resonators used by blues players. The potential for volume and sustain could be incredible. A quick scrabble around the web and what do i find? The video above of Booker White playing resonator. Seriously, he does more in the first 30 seconds of this video than most musicians could ever hope to….